A Crash Course on the U.S. Supreme Court

The Akron-Summit County Public Library offers readers of all ages an opportunity to understand the U.S. Supreme Court, including books that explain the nomination process, and decisions that impact our lives. Here are a few Supreme Court reading suggestions for every age: 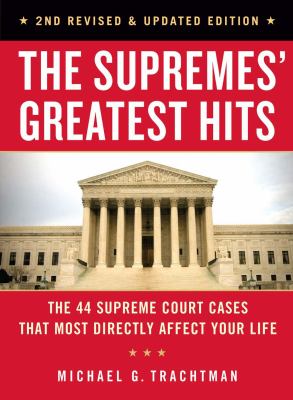 Retired Associate Justice Sandra Day O'Connor shares her unique perspective in Out of Order: Stories from the History of the Supreme Court. Learn how cases are selected for hearing; customs and traditions of the Court (including the judicial handshake); and discover pioneers such as Belva Lockwood, the first woman admitted to practice before the Supreme Court in 1879.

FDR v. the Constitution: The Court-Packing Fight and the Triumph of Democracy by Burt Solomon takes readers back to 1937 when President Franklin Roosevelt, frustrated by a conservative Court that overturned much of his early New Deal legislation, attempted to add six new justices in order to win more favorable rulings. As “court-packing” speculation spreads again in the 2020 presidential race, this is a book you will want to check out.

The Supremes' Greatest Hits
Michael Trachtman breaks down 44 Supreme Court cases that most directly affect us. From cell phones and privacy rights to religion in town hall meetings, the constitutional right to marry, “Big Government” in your business and backyard, and other relevant issues, this updated and concise paperback is “compulsively readable and insightful,” and “terrific at explaining complex issues in plain language.”

One Vote Away: How a Single Supreme Court Seat Can Change History
by Ted Cruz

These two titles offer an introduction to the history and functioning of The Supreme Court of the United States:

The Supreme Court
by Peter Benoit

These two titles can be found on Hoopla, one of our digital platforms:

The Supreme Court
by Mari Schuh

The Supreme Court is the highest court in the land! The nine Supreme Court justices study the Constitution to make sure laws are fair. Their rulings guide all other courts throughout the United States.

Jane Against the World: Roe v. Wade and the Fight for Reproductive Rights
by Karen Blumenthal

A history of the fight for reproductive rights in the United States. Tracing the path to the landmark decision in Roe v. Wade and the continuing battle for women's rights, Blumenthal examines the root causes of the current debate around abortion and repercussions that have affected generations of American women. This book intends to facilitate difficult discussions and awareness of a topic that is rarely touched on in school but affects each and every young person.

The life and career of the fiercely principled Supreme Court Justice, now a popular icon, with dramatic accounts of her landmark cases that moved the needle on legal protection of human rights, illustrated with b/w archival photographs.

A thrilling and incisive examination of the post-Reconstruction era struggle for and suppression of African American voting rights in the United States. In this vivid portrait of the systematic suppression of the African American vote, critically acclaimed author Lawrence Goldstone traces the injustices of the post-Reconstruction era through the eyes of incredible individuals, both heroic and barbaric, and examines the legal cases that made the Supreme Court a partner of white supremacists in the rise of Jim Crow.

One Person, No Vote: How Not All Voters are Treated Equally: A Young Adult Adaptation
by Carol Anderson with Tonya Bolden

Carol Anderson chronicles the rollbacks to African American participation in the vote since the 2013 Supreme Court decision that eviscerated the Voting Rights Act of 1965. Known as the Shelby ruling, this decision effectively allowed districts with a demonstrated history of racial discrimination to change voting requirements without approval from the Department of Justice. Focusing on the aftermath of Shelby, Anderson follows the astonishing story of government-dictated racial discrimination unfolding before our very eyes as more and more states adopt voter suppression laws. In gripping, enlightening detail she explains how voter suppression works, from photo ID requirements to gerrymandering to poll closures. And with vivid characters, she explores the resistance: the organizing, activism, and court battles to restore the basic right to vote to all Americans as the nation gears up for the 2020 presidential election season.

Feel free to browse, checkout, or download any of the titles listed above. If you have any additional questions or are looking for something else, you can always ask a librarian for help finding the right book for you.